The Sweeney Decade: Acquisitions at the 1959 Inaugural 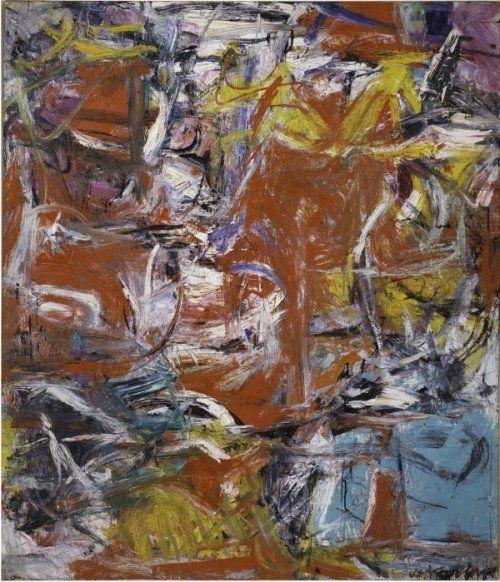 [ad#lb]
As part of its 50th anniversary celebrations, the Solomon R. Guggenheim Museum presents The Sweeney Decade: Acquisitions at the 1959 Inaugural, an exhibition featuring a selection of works that were first shown in the Frank Lloyd Wright building in the museum’s 1959 inaugural show. On view from June 5 to September 2, 2009, The Sweeney Decade features approximately 30 paintings and sculptures from the 1950s collected during the tenure of the museum’s second director, James Johnson Sweeney (1952-1960). The exhibition illustrates international post-WWII contemporary trends in abstraction, including Abstract Expressionism, CoBrA, Taschisme, and L’Art Informel with works by Karel Appel, Alberto Burri, Eduardo Chillida, Willem de Kooning, Jimmy Ernst, Jackson Pollock, Pierre Soulages, Antoni Tapies, and others.

The exhibition was conceived and organized by Tracey Bashkoff, Associate Curator for Collections and Exhibitions, Solomon R. Guggenheim Museum. In commenting on the show, Bashkoff said, “Included in the 1959 inaugural exhibition were not only the works the museum was known for, such as Kandinsky, Leger, Delaunay, but also approximately forty works from the 1950s that Sweeney was actively collecting from contemporary artists working in Europe and the US. The Sweeney Decade is essentially what could have been a ‘recent acquisitions’ show in 1959.”

At the Guggenheim Museum’s 1959 inaugural presentation, the Frank Lloyd Wright rotunda was filled with more than 120 works from its collection of modern art as well as a significant group of recently-acquired contemporary works. Highlights included works by American Abstract Expressionist artists such as Jackson Pollock and Franz Kline, as well as those by European artists exploring similar ideas, such as Karel Appel, Hans Hartung, or Pierre Soulages, who may have been lesser known to U.S. audiences.

Even before the opening of the museum’s iconic building, Sweeney was a champion of emerging and younger artists. At the newly named Solomon R. Guggenheim Museum, he organized exhibitions dedicated to “younger painters,” a term he used to refer not to age, but to the degree of an artist’s experience. He also established the Guggenheim International Award in 1956, which was given biennially to a painting completed no earlier than three years prior to the award year. Seeking what he called the “ tastebreakers” among artists of his day, he looked to Europe where diverse postwar trends in abstraction proliferated, such as Art Informel, from the French, meaning unformed or formless; CoBrA, derived from the abbreviations of its members’ home cities, Copenhagen, Brussels, and Amsterdam; and Tachism, from the French, meaning stain or spot. Artists Karel Appel, Alberto Burri, Eduardo Chillida, Antoni Tapies, and others broke with traditional composition through gestural and spontaneous means, at times incorporating unconventional materials in their work.

Sweeney also embraced what he called “fresh, unfamiliar concepts of our own”—art by vanguard New York painters such as William Baziotes, James Brooks, Willem de Kooning, and Jackson Pollock. The works of these Abstract Expressionists, who emphasized the emotional aspect of abstraction, pointed to the growing prominence of American artists. He also added sculpture—including a group of important pieces by Constantin Brancusi—to the collection, and, for the first time, works by Asian artists like Takeo Yamaguchi. The current presentation thus represents a selection of the more than 270 works acquired during Sweeney’s eight years as director of the Guggenheim.

Known to be critical of Wright’s building design as well as the efforts of the museum’s first director and his predecessor, Hilla Rebay, Sweeney had the museum’s interior walls painted white (in opposition to Rebay’s preference for fabric covered hanging walls) and removed canvases from their oversized frames. Moreover, the vision that Sweeney presented in the 1959 inaugural exhibition demonstrated the museum’s ability to embrace art that was new and challenging. By including a robust selection of works from the 1950s, made after Solomon R. Guggenheim’s death in 1949, Sweeney, in fact, remained faithful to the museum’s commitment to innovation championed by its founders. As Sweeney once said, “A museum should be a vital organism…It should constantly prod the observer to reach out from the familiar to the unfamiliar.”

In March 1960, months before he resigned from the Guggenheim, Sweeney published an article titled “New Directions in Painting” in the Journal of Aesthetics and Art Criticism. There he made the case that in contemporary art, constant change should be seen as an assurance of integrity rather than a sign of fickleness, and that it is the “artist’s business” to be original: “Actually, this so-called ‘instability’ in the art of our period is its health. It is the sign of life in it, a sign of that constant urge to refreshment which, only, will keep the language of art alive.”