The Last Harvest: The Paintings of Rabindranath Tagore
Gallery 50 (Art Institute of Chicago)
January 29 through April 15, 2012 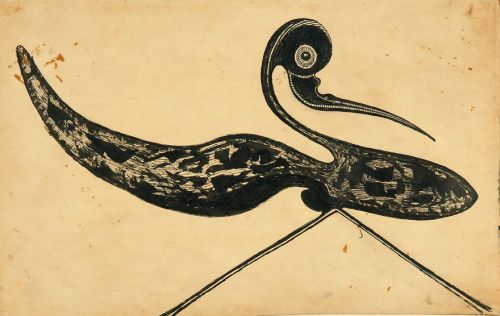 Rabindranath Tagore (1861-1941) was a transformative figure in the modern cultural history of India. Remembered primarily as a poet, playwright, musician, and philosopher, he is also recognized around the world as the first non-European recipient of a Nobel Prize for literature, which he received in 1913. Less well known, however, is his visual art, which he began creating in his mid-60s. The Last Harvest: The Paintings of Rabindranath Tagore is the first museum exhibition of his paintings and sketches, timed to celebrate the 150th anniversary of his birth, and the first major traveling exhibition from India to be shown at the Art Institute of Chicago. The exhibition, on view January 29 through April 15, 2012 in Gallery 50, presents 61 works on paper produced by this versatile and prolific visionary, drawn from three collections in India.

Tagore produced a vast amount of the written word in all genres and even composed music and wrote lyrics, including the national anthems of India and Bangladesh. As evidenced by the works in this exhibition, Tagore is also part of a long and distinguished tradition of writers, including Victor Hugo, Eugene Ionesco, and August Strindberg, whose expression extended across media and beyond the page. For many fellow writers and indeed Nobel laureates, the visual arts seemed to be an alternate mode of expression, oftentimes explored later in life. Nobel Prize-winners Hermann Hesse, Günter Grass, W. B. Yeats, and Derek Walcott all found practice in the visual arts to be an enriching and complementary activity to writing.

Tagore had no formal training in the visual arts. Born in Kolkata (formerly Calcutta), he spent his youth voraciously reading and writing, guided by his learned father. His poetry was first published when he was a teenager, and he later went on to study at University College, London–even though he never finished his degree. Over the next several decades, Tagore wrote and published an expansive collection of poetry, short stories, novels, plays, and songs. In addition, through promotion of economic self-reliance, education, and international understanding, Tagore helped lay the groundwork for modern India.

It was not until 1924, at the age of 63, that Rabindranath Tagore began painting. His artistic practice was an outgrowth of his habits as a writer and poet; revision marks and scratched-out words on his manuscripts blossomed into free-form sketches and scenes. Tagore’s cross-cultural encounters during his many trips abroad influenced his visual art–tribal artifacts of the Pacific, Javanese music and dance, ancient bronzes from China, arts and crafts of Japan, and European modernism are all evident. By incorporating these various motifs and styles, he created images–rhythmically articulate pictorial forms–he felt were universal. Indeed, his enigmatic paintings and drawings remain arresting and compelling today. Of an oeuvre of more than 2,000 works, many pieces feature faces with forlorn expressions rendered in dark, foreboding colors. Others express a reverence for nature and for the rhythm of the natural world.

Tagore’s friend Victoria Ocampo, an Argentinian socialite and writer, saw his first doodles and drawings and encouraged him to pursue art. With Ocampo’s help, Tagore mounted the first exhibition of his artwork at the Galerie Pigalle in Paris in May 1930. The show traveled to Europe, Russia, and the United States, earning him critical acclaim in the West, where Expressionists and Surrealists were celebrating the subconscious and exploring raw sensations as a means of breaking from academicism and stylistic conventions. Despite favorable responses to his artwork abroad, he was hesitant to exhibit his works in India and did not do so until 1932 when he held a major show at the Government School of Art in Kolkata. He continued to paint until his death at the age of 80 in 1941.

The Last Harvest: The Paintings of Rabindranath Tagore is accompanied by a fully illustrated catalogue published by Mapin, in association with the National Gallery of Modern Art, New Delhi. This unique volume brings together 200 works by Tagore, plus essays by leading scholars from around the world, which lend insight into Rabindranath Tagore as a painter as well as locate his paintings within the larger framework of his multifaceted creative work.

The exhibition is curated by Professor R. Sivakumar of Visva Bharati University and is organized by the National Gallery of Modern Art, Ministry of Culture, Government of India. In Chicago, The Last Harvest: Paintings of Rabindranath Tagore is organized by Madhuvanti Ghose, Alsdorf Associate Curator of Indian, Southeast Asian, Himalayan, and Islamic Art at the Art Institute.

The Style that Ruled the Empires: Russia, Napoleon, and 1812 Doug Russell