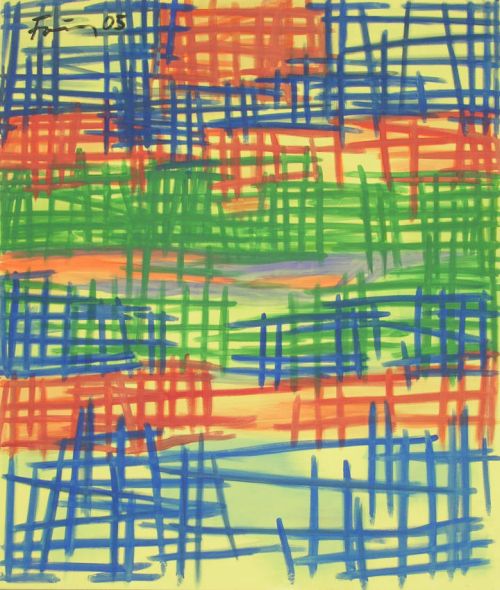 Förg is a well-known figure in the 1980s and a key member of an influential generation of German artists including Martin Kippenberger, Georg Herold and Albert Oehlen. His distinct investigations into Modernism take painterly issues into the realms of architecture, sculpture, and photography to reflect on both individual experience and historical memory.

Günther Förg’s artistic oeuvre encompasses paintings, graphic and sculptural works as well as a great body of architectural photographs. His monochrome wall paintings and lead paintings are reflections on art. There are references of Barnett Newman, Jean Fautrier, Paul Klee, Edvard Munch and American abstract painting in his works.

On display at the gallery will be a series of different sized canvases that were all produced in the years 2005 and 2006. The focal point and most prominent work of the exhibition is a 3-piece canvas from 2005 with a length of 12 meters that will inhabit the gallery’s major exhibition room and that is, due to its size, reminiscent of wall paintings.

All the works that are presented in “closer” belong to Förg’s famous “grid painting” series.

Since 1992, paintings and works on paper, known as “Gitterbilder” (grid paintings), appear in Günther Förg’s work. The idea and inspiration of these grid paintings derive from paintings such as Munch’s “Death of Marat”, a figurative work whose back- and foreground wholly consists of different coloured abstract grids. Förg is interested in the abstract and radical meaning of paintings of that important period of the 20th century and he is not afraid of using it for his own understanding of art.