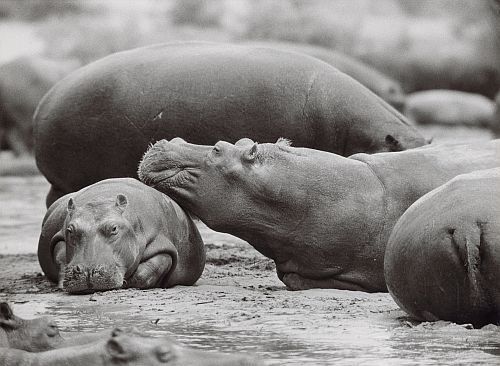 Emil Schulthess (1913-1996) is one of the classics of post-war Swiss photography, whose monumental illustrated volumes on Africa, China or the Soviet Union became international bestsellers. Schulthess gained fame in the 1970s as the inventor of the aerial panorama. The sun is ever-present in Emil Schulthess’s oeuvre – the very sight of it elicited his astonishment no matter where in the world he was. His most famous work is a 24-hour colour panorama of the midnight sun which he took in Norway in 1950 and which caused a sensation worldwide. Schulthess was born in Zurich and was originally a graphic artist. He learnt the basic principles of photography as a guest student in the photography course given by Hans Finsler. In 1936 he started working for the Zurich printer and publisher Conzett & Huber; from 1941 to 1957 he was a designer for, and one of the founder-editors of the monthly journal Du. His first travels in the 1950s took him to Africa and the United States; later destinations were Asia and South America. He also participated in an expedition to the Antarctic by the US Navy. The Fotostiftung Schweiz is now devoting a first comprehensive retrospective exhibition to Emil Schulthess to mark the 100th anniversary of the photographer’s birth.

Emil Schulthess came to photography in a roundabout way, like many other Swiss photographers of his generation, such as Gotthard Schuh or Jakob Tuggener. And like most of them, he also had a definite leaning towards all things technological, in his particular case even an obsession with special cameras and ingeniously elaborate optical devices which he often made himself. This not only enabled a kind of expanded seeing, but also the depiction of complex situations and sequences, supported or even superimposed, if necessary, by graphic art or diagrams. Unlike almost all his Swiss colleagues, however, he usually took colour photographs, which gained him the 1967 Achievement Award presented by the renowned journal U.S. Camera.

A boundless love of adventure and the urge to explore the last white spots on the map of the world with the help of his cameras were the driving forces behind Schulthess’s activities. In the course of his career, he pushed the boundaries of all the conventional picture formats. In his books he made masterful use not only of two-page spreads and fold-outs, but also of extremely wide book and picture formats, the circular format of the fish-eye lens and finally the panoramic photograph, the all-round view of the whole world at one click, so to speak.
Photography for Schulthess was not a means for subjective expression, but a depiction of the real world as he perceived it and wished to present it to the eyes of the world, using all the photographic means at his disposal. He was neither associated with the Kollegium Schweizerischer Photographen, whose members pursued artistic aims with a Swiss variant of “poetic realism”, nor was he involved in the kind of modern photo-reportage that evolved in the
illustrated Die Woche from 1951 onwards. Schulthess was a lone wolf, scarcely involved in the Swiss photography scene. In 1964, when he was presented with the culture prize of the Deutsche Gesellschaft für Photographie, L. Fritz Gruber called him a “self-taught scientist”, a photographer who through his illustrated books instructed countless people while also conveying to them his own fascination with the wonders of this world.

When Emil Schulthess died in 1996 his complete archive was initially maintained by his heirs. In 2010, however, they then presented it to the Fotostiftung Schweiz so that this important cultural and photo-historical estate might be professionally preserved and reappraised for posterity. The exhibition “Emil Schulthess – Retrospective” and the accompanying publication, with its detailed new biography, are grounded in a reappraisal of that estate which brought to light not only material that had been unknown so far, but also gaps, especially regarding the colour photographs. Depending on the brand of film Schulthess used, the original colour slides are more or less faded and can no longer be enlarged using conventional analogue processes; they had to be digitized and reworked for the exhibition so as to ensure that the fascinating colourfulness of the world which Schulthess wished to convey to his viewers could be readily accessible once again.