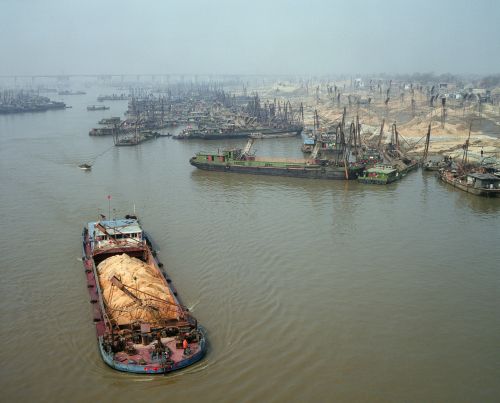 Following his highly-regarded work on the life of Chinese itinerant labourers (From Somewhere to Nowhere – China’s Internal Migrants, 2008), the Tokyo-based Swiss photographer Andreas Seibert addressed a new politically-charged theme. The project Huai He – The Colors of Growth highlights everyday reality and the challenges being faced in China today. The main focus is the almost 1,000 kilometre long river Huai which Seibert travelled from source to estuary. For the first time, the Fotostiftung Schweiz is presenting the quintessence of that complex research work in the exhibition “Andreas Seibert. Huai He – The Colors of Growth” (“Andreas Seibert. Huai He – Alles im Fluss”), curated by Peter Pfrunder.
The Huai He is one of China’s most important rivers. It is both a major lifeline for millions of people and at the same time exemplifies the changes and contradictions inherent in the burgeoning growth of the Chinese economy: although the cultures and living conditions in the different provinces differ greatly from one another, everywhere the peoples and settlements along the Huai He are confronted with the fact that today the river’s water resembles a poisonous sewer rather than a life-giving element.
Andreas Seibert’s work emerged over the course of several long journeys and is a documentary project in the classical sense. The strong impact of his images results not least from the fact that he pursues an aesthetic of his very own. The abstract facts in Seibert’s photographs take on a sensual aspect that captivates through its ambivalence. His landscape images succeed, despite everything, in conveying a melancholy beauty, and his portraits show people whose dignity and pride often outshine their inner despair. The photographer’s sense for special moods and his evident empathy with the people he met on his travels are important components of his lyrical documentary style.