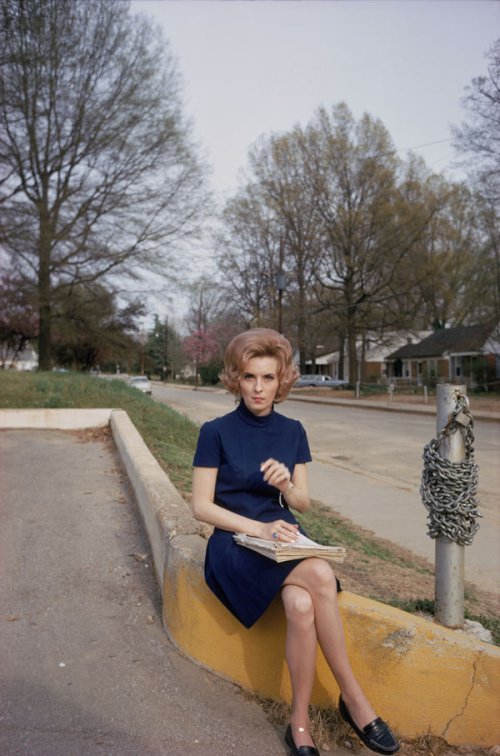 The unconventional beauty and artistry of works by photographer William Eggleston will be showcased in a major exhibition opening at the Art Institute of Chicago this winter. William Eggleston: Democratic Camera, Photographs and Video, 1961-2008–on view from February 27 through May 23, 2010, in the Modern Wing’s Abbott Galleries (G182, G184) and Carolyn S. and Matthew Bucksbaum Gallery (G188)–is the most comprehensive retrospective to date of the Memphis-based contemporary photographer. The exhibition brings together more than 150 extraordinary images of familiar, everyday subjects with lesser-known, early black-and-white prints and provocative video recordings, all produced over a five-decade period.

Born in 1939 in Memphis, Tennessee, and raised on his family’s cotton plantation in Mississippi, William Eggleston held a casual interest in photography until 1959, when he came across photo books by Henri Cartier-Bresson and Walker Evans. Among his earliest pictures, made during stints at universities in Tennessee and Mississippi, were black-and-white scenes found in his native South, as well as portraits of friends and family members. By the 1960s and early 1970s he had begun experimenting with color film, and he eventually produced rich, vivid prints through the dye transfer process-prints that are created through the alignment of three separate matrices (cyan, magenta, and yellow) generated from three separate negatives (red, green, and blue filters). The resulting prints are known for the vividness and permanence of their colors. Hence, Eggleston is often credited for single-handedly ushering in the era of color art photography.

Eager to show his work to a broader audience, Eggleston traveled to New York with a suitcase of slides and prints to meet with Museum of Modern Art (MoMA) curator John Szarkowski. This visit eventually yielded a controversial but revolutionary exhibition in 1976–MoMA’s first solo show to feature color photographs–and a classic accompanying book, William Eggleston’s Guide. At this point in his career, Eggleston had already distinguished himself by treating color as a means of discovery and expression, and as a way to highlight aspects of life hidden in plain sight.

William Eggleston: Democratic Camera, Photographs and Video, 1961-2008 demonstrates Eggleston’s “democratic” approach to his photographic subjects in both color and black-and-white. Everything that happens in front of the camera is worthy of becoming a picture for the artist–no matter how seemingly circumstantial or trivial. Eggleston finds his motifs in everyday life, resulting in telling portrayals of American culture. His iconic images such as Elvis’s Graceland, a supermarket clerk corralling grocery carts in the afternoon sunlight, and a freezer stuffed with food proves that the photographer points his “democratic camera” at everything. Eggleston’s quiet, thoughtful pictures have profoundly impacted subsequent generations of photographers, filmmakers, and scholars.

The exhibition also includes Eggleston’s cult video work, Stranded in Canton. In the 1960s, Eggleston used film to document Fred McDowell, a well-known Delta blues musician, but ultimately abandoned the film project. Eggleston later acquired a video camera and began using video to shoot in bars and in people’s homes; sometimes he shot monologues friends delivered for his video camera, most often at night. The result, Stranded in Canton , recently restored and re-edited, is a portrait of a woozy subculture that adds dimension and texture to the world of Eggleston’s color photographs.

Internationally acclaimed, Eggleston has spent the past four decades photographing around the world, responding intuitively to fleeting configurations of cultural signs and specific expressions of local color. By not censoring, rarely editing, and always photographing even the seemingly banal, Eggleston convinces us completely of the idea of the democratic camera.

William Eggleston: Democratic Camera, Photographs and Video, 1961-2008 is accompanied by a lavishly illustrated exhibition catalogue published by the Whitney Museum of American Art and distributed by Yale University Press. Numbering 320 pages and including 240 color and black-and-white illustrations, the book is filled with new scholarship about the artist and proves to be the standard reference to Eggleston’s photographs for years to come. The catalogue is available at the Art Institute’s Museum Shop for $65.