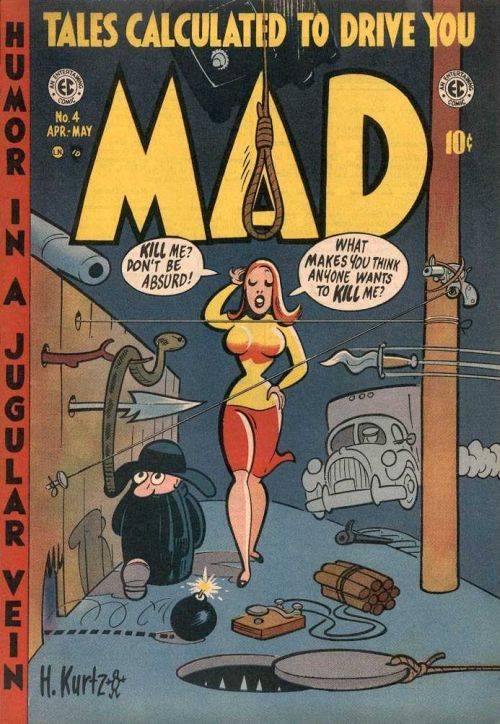 In 1952, editor Harvey Kurtzman and publisher William Gaines launched MAD, one of the most influential and imitated humor publications in the world. Originally created to parody popular TV shows, movies and, inevitably, comic books, MAD soon expanded into a wide-ranging satire of modern American culture. Features like the MAD Fold-In, “Spy vs. Spy,” the wacky sound effects of “MAD’s Maddest Artist” Don Martin, the “marginal” cartoons of Sergio Aragones, and the motto “What, me worry?” have become indelible parts of popular culture, and the magazine’s mascot, Alfred E. Neuman, is one of the world’s most recognizable faces.

The Cartoon Art Museum’s latest exhibition, What, Me Worry? 60 Years of MAD celebrates the rich history of MAD from the original comic book through the black-and-white magazine to its latest incarnation as a full-color bi-monthly publication supplemented by online content. This is the museum’s first exhibition to include both the MAD comic book and magazine.

The MAD creators, known affectionately as “The Usual Gang of Idiots,” are among the most highly regarded in the cartooning world, and works from nearly every major MAD contributor will be featured in this gallery. Exhibition highlights include cover artwork by MAD creator Harvey Kurtzman; pages from the MAD comic book by Will Elder and John Severin; early magazine-era artwork by famed artists Mort Drucker, Don Martin, Wally Wood and George Woodbridge; MAD Fold-ins by Al Jaffee; painted covers by Sergio Aragonés, Jack Davis, Kelly Freas, Norman Mingo and Jack Rickard; The Ligher Side of… by Dave Berg; Spy vs. Spy by Antonio Prohias; a look at Tom Richmond’s creative process; the dazzling caricatures of Sam Viviano; comics from contemporary contributors Peter Kuper, Ted Rall, Keith Knight and Joey Allison Sayers; a look at MAD Magazine around the world; and much, much more!