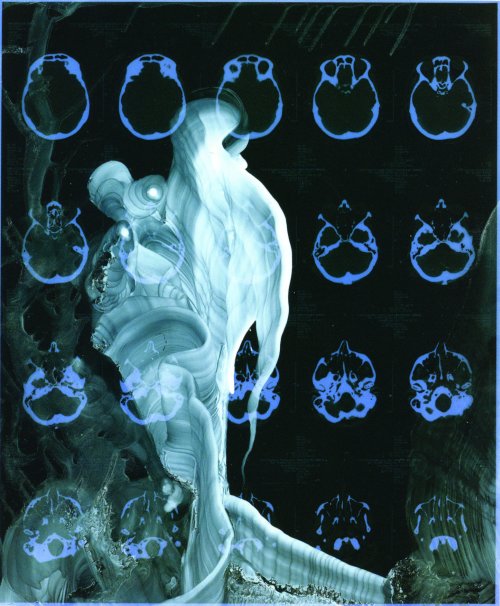 274296 is the final body of work of Grotfeldt, one of Houston’s leading artists, who died from cancer on Feb. 24, 2009. He had been treated for lymphatic illness at the University of Texas M. D. Anderson Cancer Center since 1993, when he was first assigned the patient number 274296. The 18 oil paintings that comprise the exhibit incorporate magnetic resonance imaging (MRI) scans of Grotfeldt’s own brain.

“By incorporating personal brain scans into the art of oil painting, Virgil makes a most profound human statement in a personal and original manner,” said Edwards. “The oil paintings in this exhibit, which represent a continuation of Virgil’s long career as a painter, have been completed under the most extraordinary conditions.”

The most impressive aspect of the X-ray paintings, according to Edwards, is how the translucent white oil paint floats, cloud-like, across the inky black field of brain scans.

Grotfeldt was a highly experimental painter and often used found notebooks and papers as the basis for his work, so choosing his own brain scans was the ultimate found base.

Born in 1948 in Decatur, Ill., Grotfeldt earned a bachelor’s degree in art education from Eastern Illinois University in 1971 and a master’s degree at Tyler School of Art in Philadelphia in 1974. He moved to Houston in 1977 and from 2002 until his death served as associate professor of art and artist-in-residence at Houston Baptist University. Grotfeldt’s résumé includes numerous national and international solo exhibitions. His work has been collected by the Museum of Fine Arts, Houston; Menil Collection; the Whitney Museum of American Art, New York; Chengdu Museum, China; and the Fritz Becht Collection, Amsterdam.

Rusty Scruby: Playing in the Sand Peggy in Venice. Photographed by Nino Migliori