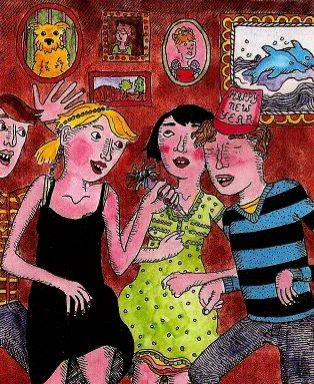 Cartoonist Tessa Brunton was raised in the Bay Area and now lives in Oakland. Although Tessa began making zines in high school, she first discovered comics while working at a comic shop in college. In 2006, when Tessa was informed by her dentist that she needed braces, she began to chronicle the trials of adult orthodontia for a poor 20-something in the online comic blog Tessa’s Braces. As her comics delved into other topics, she began to self-publish the mini-comic In the Tall Grass. Since then, her comics have appeared in Bitch magazine and in the anthologies I Saw You and The Bridge Project. She is currently compiling the fifth issue of In the Tall Grass and working on Passage, a 32-page comic for Sparkplug Comicbooks that will be published later this year. Brunton continues to post autobiographical comics on her website Suck It Mussolini Comix at www.tessab.net, focusing on eccentric family members, troublesome housemates, dating and being diagnosed with a long-term illness.