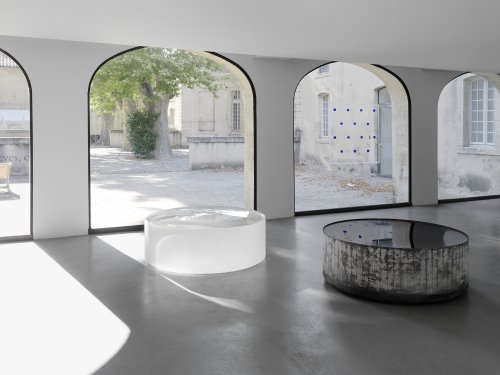 The show begins on the ground floor, the KUB Arena, with several largeformat paper works. Not aiming to render any concrete images, the drawings conjure up a series of associations, bringing to mind the way in which they were produced and in doing so become “histories of themselves”. In the process of creating her paper works Horn cuts and sometimes assembles several sheets of paper to form large drawings in which she combines the cut edges to create new interfaces. By joining the paper fragments in this way, the artist produces raw and tactile surfaces. The haptic quality of the drawings is intensified through the use of unbound, seemingly porous pigments. One might interpret the cutting up and reassembling process as a search for an ideal form or spatial cohesion. Moreover, this technique also makes reference to the fundamental awareness that our perception of the world is fragmentary.

The diversity of Roni Horn’s work – e.g. in the selection of media that comprises artists’ books, drawings, photographs, and sculptures – is also manifested in its broad thematic orientation. Despite this wide range, however, one still recognizes certain preferences, for example the artist’s sensitive attention to language and its cultural, social, and poetic potential.

Roni Horn’s profound sensibility for the soft factors of verbal and written communication is also reflected in the title of her Bregenz exhibition “Well and Truly.” As a slightly old-fashioned idiom it not only introduces a historical filter but also implies a series of references on different levels. Through its insistent redundancy “Well and Truly” also calls to mind pairs of opposites like “light and dark” or “soft and firm.”

This way of thinking in terms of pairs is another characteristic element in Roni Horn’s work. By combining seemingly identical elements – for example the two words in the title of her Bregenz exhibition that are superficially seen as interchangeable in meaning – she makes the attentive viewer aware of subtle nuances and variations.

The artist’s sensitivity for similarities and differences can also be seen in modified form in her work a.k.a., which spans an entire floor of the KUB.

Arranged in pairs, thirty portraits of the artist taken of her from when she was a little girl to today produce a sequence of images that address in a diversified way such themes as the passage of time and gender identity. The work demonstrates once again that to Horn the self-awareness resulting from the intense experiences of the self as the subject in relation to both surroundings and time is more important than norms of gender, sexual orientation, and ethnic, cultural, or social affiliation.

Considering Roni Horn’s aforementioned subtle sensibility for language, it comes as no surprise that she has been interested in Emily Dickinson’s poetry for many years. The nineteenth-century American poet lived a very reclusive life in the small town of Amherst, Massachusetts. Emily Dickinson was not only a poet whose work revolved around subjective experiences, loneliness, and a fascination for death but also and above all a naturalist. In the aluminium bars with their white lettering, a work series entitled White Dickinson of which a selection will be shown in the Bregenz exhibition, the visitor finds words and descriptions of the immediate and ambivalent relationship to nature that Horn shares with Dickinson.

The density implied in the exhibition title “Well and Truly” arouses spatialsculptural associations of depth, rootedness, and a fundamentally vertical orientation. For the artist these references are very welcome as they allude to a new series of sculptures created especially for Bregenz. Their titles all include the word “well.” In these ten low, round objects – each with a diameter of 92 centimeters and made of solid cast glass – the artist continues her exploration of the material that depending on how it was worked might appear both opaque and transparent, heavy and light, matt and shiny.

Viva la Revolución: A Dialogue with the Urban Landscape Here Not There: San Diego Art Now