The High Museum of Art will present an exhibition of four masterpieces by Claude Monet from the collection of The Museum of Modern Art (MoMA), New York, beginning June 6. The installation will feature MoMA’s renowned 42-foot-wide triptych, “Reflections of Clouds on the Water-Lily Pond,” which is the largest “Water Lilies” painting in the U.S. The High’s presentation of “Monet Water Lilies” launches a multi-year, multi-exhibition collaboration between the High and MoMA, with additional exhibitions currently under development for 2011 through 2013. 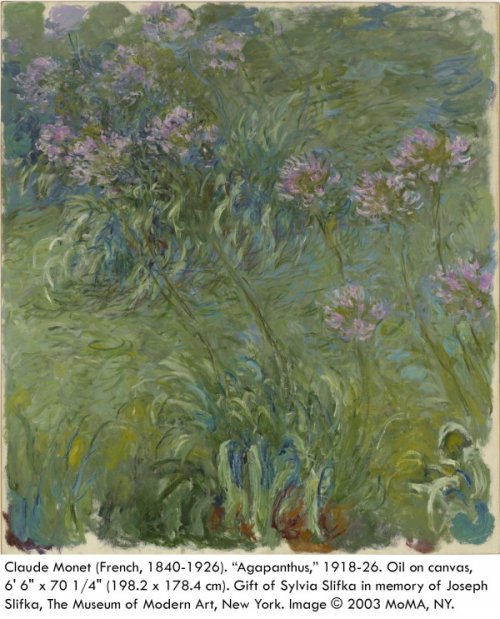 [ad#lb]
The initiative builds on successful past collaborations between the High and MoMA that resulted in four exhibitions presented in Atlanta between 1997 and 2000. This project will extend ties between the institutions through professional exchanges, development of educational programs and publications, and reciprocal admission benefits. Lead sponsorship for “Monet Water Lilies” and the MoMA collaboration will be provided by Bank of America. Additional support has been provided by individual donors through the Modern Masters Circle of the High Museum of Art and through a planning grant from The Rich Foundation.

“Monet Water Lilies” will also include another monumental painting of the water lilies in the Japanese-style pond that Monet cultivated on his property in Giverny, France (“Water Lilies,” c. 1920, 6′ 6 1/2″ x 19′ 7 1/2″), as well as “The Japanese Footbridge” (c. 1920-22) and “Agapanthus” (1918-19), depicting the majestic plants bordering the pond. The paintings portray Monet’s flower garden and water lily ponds at his home in Giverny, France. The exhibition will be on view through August 23, 2009, and will subsequently go on view at MoMA from September 13, 2009, through March 29, 2010. It is organized by Ann Temkin, the Marie-Josée and Henry Kravis Chief Curator of Painting and Sculpture at The Museum of Modern Art.

“Monet’s iconic ‘Water Lilies’ at the High Museum will be an unforgettable experience for the people of Atlanta and the region. These paintings are jewels in MoMA’s collection that visitors from around the world make pilgrimages to see, so we’re especially pleased to bring these works directly to residents of the Southeast,” said Michael E. Shapiro, the High’s Nancy and Holcombe T. Green, Jr. Director. “This exhibition kicks off a multi-year partnership that will bring exciting works of art to Atlanta, drawn from the greatest collection of Modern Art in the world, including masterpieces by Picasso, Matisse, Miró, Pollock and Warhol.”

As part of this multi-year, multi-exhibition collaboration with MoMA, in fall 2011, the High will present a major exhibition from MoMA’s collections, exploring the work of twelve of the most important artists of the twentieth century—Brancusi, Calder, de Chirico, Duchamp, Johns, Léger, Matisse, Miró, Mondrian, Picasso, Pollock, and Warhol. The achievements of these pioneers of modern art will be presented in-depth to explore each artist’s stylistic development as well as to highlight their roles in the most important artistic developments of the twentieth century, including the invention of cubism, the emergence of abstraction, and the development of surrealism. A second primary exhibition and additional focus shows are being developed for 2012 and 2013. This initiative builds upon successful past partnerships between the two institutions that brought four previous exhibitions to Atlanta: “Matisse: Masterworks from The Museum of Modern Art,” 1997; “Picasso: Masterpieces from The Museum of Modern Art,” 1998; “Pop Art,” 1999; and “Van Gogh’s Starry Night: Three Masterpieces from The Museum of Modern Art,” 2000.

Claude Monet
Claude Monet (French, 1840 – 1926) painted around 3,000 works during his lifetime; over two hundred and fifty were water lilies. Monet’s later years were spent at Giverny, approximately 40 miles from Paris, where he explored his passion for gardening. For ten years, he constructed and expanded his gardens. The project required six full-time gardeners, one of whom focused exclusively on the water lilies. When Monet decided to paint the ‘Water Lilies’ series, he built a new studio to house the large panels. On November 12, 1918, the day after the Armistice, Monet offered to donate two ‘Water Lilies’ paintings to France in honor of the victory; this promise led to his eventual gift of twenty-two panels, which were installed at the Musée de l’Orangerie in Paris in 1927, shortly after the artist’s death. When Monet died, many of these last works remained in his studio, left under the care of his son. They were ignored by critics until interest in the ‘Water Lilies’ was revived in the 1950s. As the first public collection in the United States to acquire one of Monet’s large-scale water lilies compositions, MoMA and its founding director Alfred Barr, Jr. are credited with introducing the American public to these important and spectacular works.