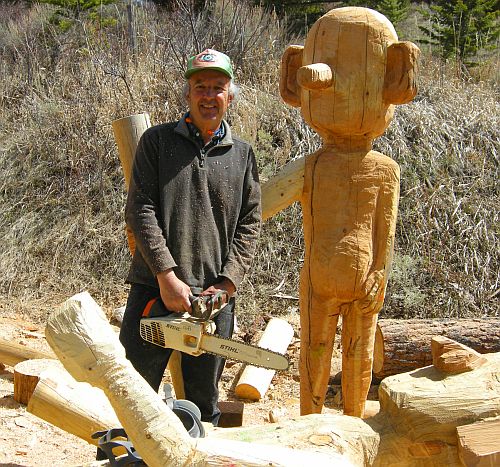 Jay Schmidt has been making art for thirty years in Bozeman, MT. The Missoula Art Museum is excited to work with Schmidt on mounting this comprehensive one man exhibition, his first major museum show in Montana. As visitors to the exhibit will see, Schmidt is a prolific painter and sculptor with a strong vision. A primary exhibition of his work is long overdue in our state.

Schmidt earned a BFA from the Kansas City Art Institute in 1974 and completed his MFA at the University of California, Davis two years later. In 2007 he retired from a twenty-four year career as a professor in the School of Art at Montana State University. Since then, Schmidt’s studio practice has gained the head of steam of a freight train. Over the past five years, Schmidt has been integral in orchestrating a dozen collaborative exhibitions as well as two solo shows leading up to this MAM exhibition.

Outside Schmidt’s home studio, situated on a hillside above an idyllic little Montana valley outside of Bozeman, stand outsized sculptures executed with a chainsaw. The piece titled Mascot is a menacing, two-faced anthropomorphic rat; the face on one side glares at you through one large, blood-shot eye and smokes a cigarette, the opposite side of the head is a brutish rendition of the clichéd dumb, buck-tooth rat complete with a red clown nose. There is a large bird-headed man with a totem of sorts on his back. A large skeleton stands, with jointed, dangling arms and hands held upright by marionette strings in a questioning pose, beside him an M-16 rifle painted Day-Glo stands taller than the figure.

Entering Schmidt’s studio, the viewer is immediately engulfed by the impact of his paintings. His large scale, multiple panel canvases are at once a visual orgy of challenging imagery and beautifully constructed compositions of color and form. Schmidt works on a single picture plane – there is no fore, middle and background – carefully filling the canvas from edge to edge and corner to corner in the manner of a good formalist painter. But in these paintings the elements of composition are symbols laden with contemporary imagery, nothing is sacred in Schmidt’s paintings. To be clear, while some of the works may be disturbing, it is only because the words, images, Pop culture symbols, and faces used carry so much weight in our current culture. This work addresses our contemporary global culture in a frontal assault. While the work’s subject matter is aggressive and confrontational, it is remarkable in that there is no message of self-righteousness or moralistic lecture. In this feat, Schmidt’s experience and maturity shines through.

Warning Shots is the perfect play between the 2-dimensional and 3-dimensional work. Whereas the sculpture is brutish and tends to emphasize an “anti-craft” aesthetic, Schmidt’s painting style is refined, mature, and bold. The works in the exhibition play off each other as a fully resolved whole. Schmidt’s Warning Shots is powerful and thought-provoking, yet beautiful to gaze upon its colorful, advanced compositions. This body of work spurs a sincere visceral reaction, something not uncommon in the presence of powerful art, but also rare to some artists.