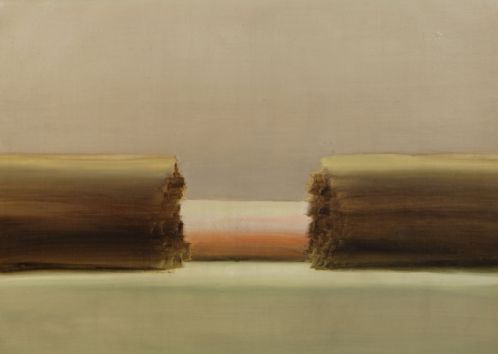 Igor Vulokh (1938 – 2012) was born in Kazan. He”s lost his father on the fields of WWII, was grown in an orphanage, and was reunited with his mother only after the war. He graduated from art school in Kazan, where he was influenced by his teacher, Victor Podgursky, who was an expert in Chinese and Japanese art and had lived a long time in China. In 1957 Igor Vulokh participated in the All-Union Art Exhibition in Moscow Manege. His work “Winter” was highly marked by the influential artists Sergei Konenkov and Konstantin Yuon on that exhibition.

Igor Vulokh moved to Moscow a year later to attend the Surikov Institute. However he became a student of the Faculty of Arts All-Soviet State Institute of Cinematography where he met with Vasily Shukshin to-be a famous writer, screenwriter, director and actor. Igor Vulokh found many friends in Moscow — Nikolay Khardjiev and Troels Andersen, the largest specialists in Russian avant-garde, collector George Costakis, film critic and current director of the Cinema Museum Naum Kleiman, poets Alexei Kruchenykh and Gennady Aygi. Igor Vulokh became a close friend with Gennady. The artist created a series of sketches for his poetry, Gennady Aygi created cycle of poems on his art. In 1994 Vulokh creates the graphic series to the poems Tomas Tranströmer, a major Swedish poet of the 20th century online casino who became the recipient of the 2011 Nobel Prize in Literature. Tranströmer”s language and metaphorical world of his poetry were clear to Vulokh despite the geographical distance between them.
Igor Vulokh exhibited in Russia, USA, Germany, Denmark, Sweden, Finland, Switzerland, Poland, Italy, Greece and Japan. In the last years of his life he actively participated in group exhibitions of the second wave of the avant-garde: “Traditions of Non-Conformism” (MMOMA, 2009), “To Be Removed From The USSR” (“Ekaterina” Cultural Foundation, 2011). His works are in the collection of the State Tretyakov Gallery, the State Russian Museum, the Museum of Modern Art of Silkeborg (Denmark), the State Museum of Conceptual Art in Thessaloniki (Greece), being traded by auction houses Sotheby”s and MacDougall”s. The exhibition presents early works of Vulokh, the works of the legendary “White Period”, the famous graphic cycles to poems of Gennady Aygi and Tomas Tranströmer, as well as the author”s series of chinaware. The exhibition includes approximately 200 pieces of art.