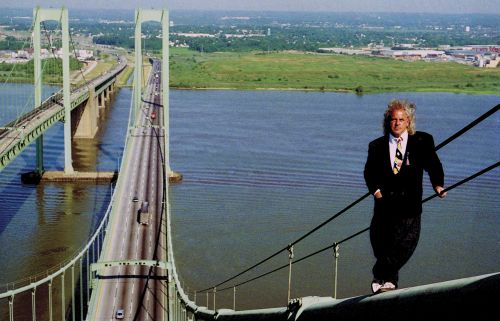 For more than 50 years, photographer Fred Comegys has captured international celebrities and local kids for the pages of The News Journal, Delaware’s most prominent newspaper. His distinctive images present national news and local interest stories, and perhaps most memorably, the intersection of the two. Born and raised in Delaware, he comes by these local angles naturally. The Delaware Art Museum is pleased to present Fred Comegys Photographs, featuring 60 images taken by Comegys over the last four decades, on view February 12, 2011 – May 1, 2011.

After graduating from Conrad High School, Comegys, now 69, began his lifelong career at The News Journal as a copy boy. Comegys quickly gravitated toward the photography lab, where he served as an assistant. His first opportunity to get behind the camera occurred when the paper needed a photographer to take a simple mug shot. Comegys hasn’t put the camera down.

Comegys’ photographs are both visually striking and effective as journalism. Covering events from the 1960s through recent years, the photographs on display remind us what it has meant to live in Delaware for the past half-century. His images of military training on Bethany Beach and the Wilmington riots reveal recent history, and his pictures of the Port Deposit Flood of 1972 convey devastation in human terms.

On the lighter side, the exhibition features images of rock concerts, including Prince’s Purple Rain tour, Bruce Springsteen and the E Street Band, and Live Aid. Also on view are photographs of the Phillies at Connie Mack Stadium, and a thrilling shot of the Great Wallenda walking on a high wire across Veterans Stadium. The show includes unexpected, behind-the-scenes glimpses of Steve Carlton and Rod Stewart.

Comegys is an extraordinary portrait photographer, as witnessed in pictures of famous figures-Joe Biden, Mohammed Ali, Gloria Swanson, Jamie Wyeth-and ordinary individuals at work. The photographer seems particularly sympathetic to those engaged in dangerous labor. Throughout his career, Comegys has accompanied workers to their dangerous perches on bridges and construction sites, chronicling their work in heroic images.

The photographer also delights with his humorous juxtapositions and surprising shifts in scale.

“Comegys is a talented newspaper photographer; he knows how to tell a story visually by capturing the ‘defining moment,'” said Heather Campbell Coyle, curator of the exhibition. “But he also has this surrealist sense of humor, photographs like the cow eating the campaign poster make you smile.”

Comegys’ photographs have also appeared in Life, Time, Sports Illustrated, The Sporting News, and Forbes. In 1985, he was named National Newspaper Photographer of the Year by The National Press Photographers Association. That same year, he was one of five finalists for a Pulitzer Prize.

The Delaware Art Museum is celebrating the career of this widely renowned photographer with a retrospective exhibition.