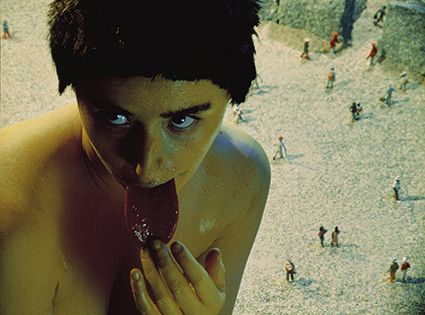 Cindy Sherman is one of the most important artists today. Since her breakthrough in the early 1980s, she has revolutionised both contemporary art and attitudes to photography. Sherman’s works have had a profound impact on our ideas of the construction of identity, and on the mythogenic power of pictures. The exhibition Cindy Sherman – Untitled Horrors emphasises the undercurrent of horror and fascination that runs through Sherman’s entire output.

“This is a dream exhibition for Moderna Museet. And the fact that Cindy Sherman has been so intensely involved in producing her first solo exhibition in Stockholm makes it even more exciting. She is an artist whose practice continues perpetually to develop, and we are showing the entire range of her oeuvre,” says Daniel Birnbaum, director of Moderna Museet.

The exhibition Cindy Sherman – Untitled Horrors features works spanning from her early series up to her recent socialite portraits and murals. The selection reflects the recurrent disturbing, grotesque and unsettling strain in Sherman’s imagery. She uses herself as a model, but her pictures are not portraits. The roles she assumes in her works range from female stereotypes to symbiotic combinations of man and animal or machine, and can be at once disturbing and comical. Genres such as history painting, fashion photography and pornography are manipulated, but Sherman’s intention is never to create an entirely convincing illusion. She combines familiar elements in new constellations to disrupt the most obvious readings. There are allusions to film noir and splatter, wicked fairytales and possible violent acts, but the horror and disgust are more in the eye of the beholder. There is no sex in Sherman’s Sex Pictures, no nudity in her Centerfolds. Her artistic approach has obvious similarities with surrealist ideas on transcending the conscious, rational self.

“A great deal has been read into Cindy Sherman’s works, but she herself refutes any labels and rarely discusses what the works are about. With distinct flaws in her enactments, and with impossible, playful details that spoil the illusion, she enables us to generate our own images and narratives. Sherman circumvents our rational, categorical eye,” says Lena Essling, curator.

Cindy Sherman (born 1954 in the USA) belongs to a generation of postmodern artists whose work is primarily conceptual, and who deny the supremacy of the original or the existence of absolute truth. She chose photography at a time when painting was the dominating medium, and was influenced by the conceptualism of the late 1970s and 1980s, moving images and performance art. Cindy Sherman’s works have become icons to a number of prominent theorists within art, feminism and culture. The exhibition Cindy Sherman – Untitled Horrors features more than 100 photographs spanning from the 1970s to today, including her groundbreaking Untitled Film Stills (1977-80) and well-known series known as Centerfolds (1981), Fairy Tales (1985), History Portraits (1988-90), Society Portraits (2008) and new works from 2012.