The Museo Thyssen is presenting the first retrospective on Cézanne to be held in Spain in thirty years, following the one at the MEAC in 1984. The exhibition includes 58 works:
49 oils and 9 watercolours lent by museums and private collections around the world (including the USA, Australia and Japan), many not previously seen in Spain. They will be shown alongside nine works by artists such as Pissarro, Gauguin, Bernard, Derain, Braque, Dufy and Lhote. 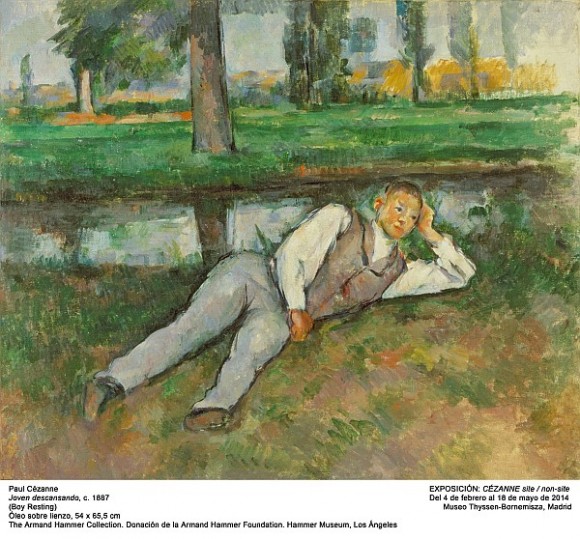 Born  in  Aix‐en‐Provence,  Paul  Cézanne  (1839‐1906)  was  the  son  of  a  wealthy  hat manufacturer and later banker of whom Cézanne would say, with some irony: “My father was a man of genius; he left me an income of 25,000 francs.” Cézanne was a fellow school
pupil  of  the  future  writer  Émile  Zola,  with  whom  he  maintained  a  close  and  complex
friendship for many years. Although Cézanne followed his father’s wishes and embarked on
studying law, he soon moved to Paris to follow his true vocation of painting. There he made
friends with Pissarro, ten years his senior, who would be the closest to a teacher that he had.
He  also  met  Manet  and  took  part  in  the  Impressionists’  informal  debates  at  the  Café
Guerbois.

Every year from 1863 onwards Cézanne sent his paintings to the official Salon but they were
never  accepted.  In  1874  he  took  part  in  the  first  Impressionist  exhibition  but  would
subsequently only exhibit with them once, in 1877. Critics considered him the clumsiest and
most eccentric of the group. The negative words employed to describe his painting – brutal,
coarse, infantile, primitive – would eventually become terms of praise for the originality of
his work.

While hisfellow painters, led by Monet and Renoir, would enjoy increasing success, Cézanne,
who had abandoned the capital for Aix, would continue to be ignored until 1895. Between
November  and  December  of that  year  his  first solo  exhibition  of  around  150  works  at
Ambroise Vollard’s gallery earned him the respect and admiration of his colleagues and made
him a key reference point for young painters. By the time of his death ten years later Cézanne
was acknowledged as a key figure in modern art.

The predominant genre in Cézanne’s work is  landscape, which accounts for half his total
output  and  which  he,  like  his  Impressionist  colleagues,  identified  with  the  practice  of
outdoor painting. In contrast to the Impressionists, however, Cézanne also conceded a crucial
importance to a genre characteristic of the studio, namely the still life. Throughout his career
he produced both landscapes and still lifes, which respectively represent direct contact with
nature  and  the  laboratory  of  composition.  The subtitle  of  this  exhibition, site/non‐site,
derived from the artist and theoretician Robert Smithson, refers to this dialectic between
exterior and interior, between outdoor painting and studio work