Norton’s Gauguin in Gauguin: Maker of Myth at the Tate Modern, London

For the next several months the Norton Museum’s celebrated painting by Paul Gauguin, Christ in the Garden of Olives, 1889 will be featured in the exhibition Gauguin: Maker of Myth at the Tate Modern, London, and the National Gallery of Art, Washington, DC. 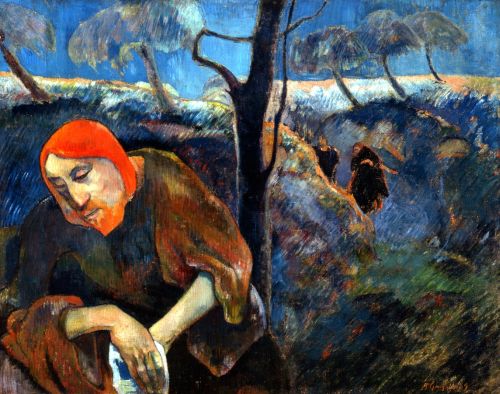 Gauguin is undoubtedly one of the most influential and celebrated artists of the late nineteenth century. Remarkably, this is the first major exhibition in London to be devoted to his work in over half a century. Opening at Tate Modern on September 30, 2010, Gauguin: Maker of Myth will trace the artist’s unique approach to storytelling. Bringing together over 100 works from public and private collections from around the world, the exhibition will take a fresh and compelling look at this master of modern art.

In Christ in the Garden of Olives Gauguin portrayed himself in a tragic, iconic mode as Jesus Christ in the Garden of Gethsemane on the night of his betrayal by Judas Iscariot. In a poignant reference to his attempted artistic liaison with Vincent van Gogh, which had recently ended in a debacle, Gauguin has given himself bright orange-red hair—like that of his erstwhile colleague and friend. During much of the painting’s absence from West Palm Beach the Norton will display, instead, an almost exactly contemporaneous self-portrait by Van Gogh on loan from the National Gallery of Art, Washington, DC, which was likewise painted in the immediate aftermath of the contentious and aborted sojourn with Gauguin, at Arles, which lasted from October through December 1888.

Norton’s Monet in Major Exhibition at the Grand Palais, Paris Titian and the Golden Age of Venetian Painting at High Museum of Art (Atlanta, USA)