The Solomon R. Guggenheim Foundation is pleased to announce that the BMW Guggenheim Lab will open in the Pfefferberg complex, in the Berlin neighborhood of Prenzlauer Berg. The BMW Guggenheim Lab—a temporary public space and online forum encouraging open dialogue about issues related to urban living—will offer free public programs from June 15 to July 29, 2012. 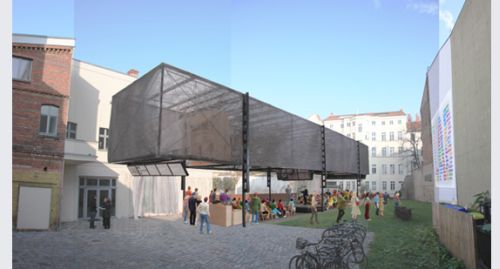 “We are sincerely grateful to Klaus Wowereit, Mayor of Berlin, Franz Schulz, Mayor of Kreuzberg, Matthias Koehne, Mayor of Pankow, the Berlin Senate, and the citizens of Berlin for their outpouring of support for our project, and we are thrilled to move forward with the BMW Guggenheim Lab in the great city of Berlin,” said Richard Armstrong, Director of the Solomon R. Guggenheim Museum and Foundation. “The decision to relocate the Lab was not an easy one, but we are very pleased to have so quickly confirmed such a suitable alternative and to continue the urgent and important discussions we have begun about cities, and specifically about Berlin, at the Pfefferberg site. The Lab can only flourish through input and participation from people of all viewpoints, so in that sense the Berlin Lab has already begun.”

Pfefferberg, a former industrial complex that houses artists’ studios, galleries, and restaurants, was first chosen as the site for the BMW Guggenheim Lab Berlin in June 2011. In January 2012, the Guggenheim Foundation announced plans to move the location of the Lab to Kreuzberg, on an expansive lot at the corner of Cuvrystrasse and Schlesische Strasse, along the River Spree. These plans were subsequently withdrawn because of concerns that the project would be disrupted.

Maria Nicanor, curator of the Lab for Berlin, stated, “The Lab Team and I have been working in Berlin for months to develop programs with this city, along with the help of many friends in the community. Speaking personally, I feel happy to be moving forward and grateful to be doing it with the co-operation of BMW. They have respected our complete curatorial freedom from the beginning of the project and supported us in every decision we have made.”

The BMW Guggenheim Lab Berlin
Programming for the Berlin Lab has been developed by the Guggenheim Museum. All programs have been created by the Berlin Lab Team (José Gómez-Márquez, Rachel Smith, Corinne Rose and Carlo Ratti), an international, multidisciplinary team of innovators and experts led by Guggenheim curator Maria Nicanor. In addition to programs based at the Pfefferberg site, the Berlin Lab will offer a variety of city-wide explorations. All programs will be free of charge. As programs are developed, media updates will be issued.